What I Witnessed at the Ukrainian Border 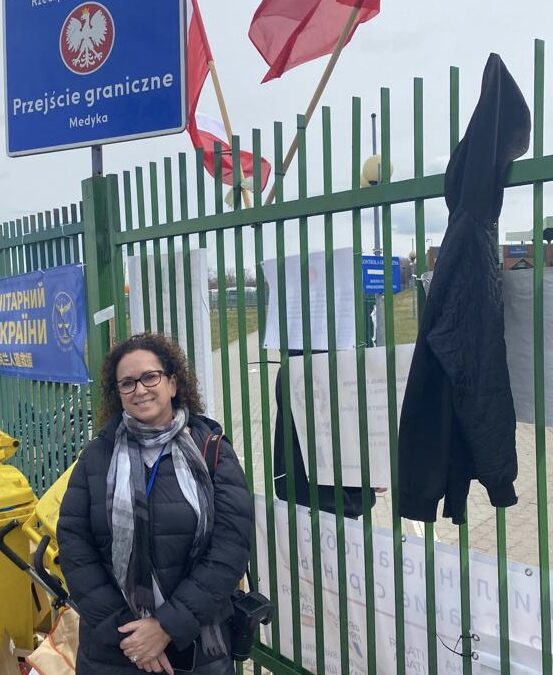 Earlier this month, I had the honor to travel to Poland and visit the Ukrainian border with the Jewish Federation of North America.

As the mom of six children, I have traveled to many countries in this world and seen many things.

I have never witnessed anything like I did at the Ukrainian border.

At the beginning of the war, people were waiting in lines that lasted for miles just to cross the Ukrainian border. At the time of my writing this, three million people have already left Ukraine.

So by the time we arrived, the number of refugees crossing the border was a little more sporadic. Still, it was heartbreaking to watch people cross the border with a small bag that represented their entire life.

Carrying a lifetime of memories in just one tiny bag, they were forced to make choices that I don’t ever think I’ve ever thought about making in the entirety of my life.

But just watching them caused me to reevaluate my own life and think about the things I would be okay leaving.

It caused me to ask questions like: What are the valuable things I would take with me? Do I have the right documents? How do I make sure my family is safe? and Where would I go?

These are all questions these refugees had to think about—and so many more as they crossed the Ukrainian border.

In a single moment, they had to make a decision that would change their life.

But it must have brought them some sense of relief as they saw all of the volunteer tents set up just on the other side. Food, healthcare, supplies, and even a row of strollers were all there waiting for them as they stepped into Poland.

Moving beyond the border, there were refugee centers with all kinds of volunteers from every walk of life cooking food, offering rides, bringing comfort, and doing anything within their power to simply help those who had lost everything.

As we visited one of these refugee centers, I was impressed by how they could take an empty mall-like warehouse and transform it into a place of safety and refuge.

But as we walked into the building, it was what I heard that had the greatest impression on me.

It all seemed ordinary in a way, nothing really extraordinary at all in the sounds. But it’s what they weren’t saying that spoke volumes.

They were waiting. Their entire life had been taken from them in an instant. And you could see on their faces that they were just trying to figure out what they were going to do next.

Most of the people in the refugee center were women and children.

There were some older men there, but most men were compelled to stay and fight. It was their duty, if they were between a certain age, to stay and fight for the Ukrainian government. So they did—even as their families fled the country.

These remarkable women had to make so many life-altering decisions for themselves and their children. All while their husbands and sons and grandsons fought on the front lines in Ukraine.

The bright light I saw while visiting the Ukrainian border was the volunteers.

There were people from all over the world who stopped whatever it was they were doing in their personal lives. They traveled at their own expense to come and take care of people that they had never before met.

That is what humanity does.

That’s what humanity should do.

There were volunteers from Switzerland who packed up their van with food and drove to the border so they could help feed the refugees.

Doctors put their own practices on hold and traveled to the Ukrainian border to treat penniless patients who needed them the most.

There were church groups and relief groups and so many others who selflessly came to lend a helping hand and lift a broken heart.

It was probably one of the most life-changing experienced I’ve had.

Visiting the Ukrainian border put everything into perspective for me.

It made me question why we even have war. Why do we need to kill people or compel them to think the way we think or do the things we want them to do?

It just doesn’t make sense to me.

These were mothers and fathers, brothers and sisters, aunts and uncles, grandparents, and children. These were real people just trying to live their lives the best they could. And in an instant, because of the decision of others, their entire way of living was gone.

John F. Kennedy said, “For of those to whom much is given much is required.”

So many of us are incredibly fortunate to have what we have.

And we have a communal responsibility to help others no matter who we are. I believe this is especially true when it comes to helping the people of Ukraine.

Imagine if it was you. What would you do if you had to give up your life as you know it? What would you put into your bag knowing you may never come home again because there may not be a home to come home to?

It’s hard for me to even imagine what I would do if tomorrow I had to put a backpack on my back, take my children and my dogs, and flee. But that’s exactly what’s happening to the people of Ukraine.

What I saw on the Ukrainian border was horrifying and heartbreaking.

Good must overcome evil—and it starts with all of us.

It starts with conversations, with donations, with volunteer work, with sharing this article, and with writing an article of your own.

It starts with letting your voice be heard and standing up for those whose voices have been taken from them.

A different world cannot be built by indifferent people.

For the sake of our children and our children’s children, it’s time that we all take a stand.

Together, we can build a better world one step, one dollar, and one voice at a time.